The REEL ROCK Film Tour brings the best climbing and adventure films of the year to live audiences throughout the world with shows of high energy, community feel, party atmosphere that go beyond a mere film.

Founded in 2006 by ground breaking filmmakers Josh Lowell (Big UP Productions) and Peter Mortimer (Sender Films), REEL ROCK has grown to over 400 events per year, reaching over 100,000 viewers worldwide.

Tickets are available at

Here is small snapshot of this year’s show…..

Forty-three-year-old Yuji Hirayama is one of the great legends of modern climbing. Near retirement, he plans one big swan-song mission to complete a project, one of his hardest ever, at the spectacular summit of Mount Kinabalu, on the island of Borneo. But first he must find the right partner. Enter Daniel Woods, the young American boulderer who is one of the strongest humans in the climbing world, but lacks mountain experience. Daniel-San travels to Japan to prove himself worthy of Hirayama’s mentorship, and the unlikely duo team up for the expedition of a lifetime.

The UK climbing scene is known for its strict traditional ethic, yielding dangerous routes and a competitive machismo among the driven young climbers risking it all to prove their boldness. It’s the last place you’d expect to find a nice little blond girl putting all the lads to shame, but Hazel Findlay is doing just that. The first woman to climb the British grade of E9 (super hard, super sketchy), Hazel is a connoisseur of loose rock, dodgy gear, and big runouts. Having mastered the scrappy seacliffs at home she teams up with Emily Harrington to tackle the massive, untamed bigwalls of Taghia Gorge, Morocco.

We’ve been following some of the biggest stories in the climbing world, from the mess on Mt. Everest, to new routes in Antarctica. Featuring Ueli Steck, Simone Moro, Steph Davis, Leo Houlding, and more of the best athletes on rock, snow, and sky… 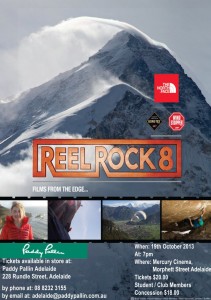